Most Westfieldians lead unassuming, quiet lives, untouched by fame or notoriety, and that’s been true since its founding. But once in a while fate taps one of ours for eternal posterity. Here are a few of our residents and friends so rewarded.

Natalie Merchant is known worldwide as the lead singer for the 10,000 Maniacs and as a platinum-selling solo artist, but folks in Westfield know her as the bright, artistic girl who lived here from 1975 to 1980 and attended Westfield Academy. Natalie formed 10,000 Maniacs in nearby Jamestown, New York in 1981 when she was only 17. The band signed with Elektra Records in 1985 and soon enjoyed commercial success in the alternative rock genre, particularly with the release of the In My Tribe album in 1987. Natalie left the band in 1995 to pursue a solo career, and her release Tigerlily was a multiple-platinum hit. Natalie was a headliner for the Lilith Fair, a traveling music festival featuring female solo artists that was popular in the late 1990’s. She continues to write and perform.

William H. Seward lived in Westfield from 1835 to 1838, serving as agent for the Holland Land Company. He later became President Lincoln’s Secretary of State and proponent of the Alaska Purchase, derisively and shortsightedly labeled “Seward’s Folly.” As agent for the Holland Land Company, Seward demonstrated his political chops by defusing the tension between the company and landowners about a tariff the company tried to impose on farmland, to which the farmers’ response had been to storm the land agent’s office in Mayville, destroy the records stored there, and demolish the building. In less dramatic fashion, in July 1837, Seward offered a “Discourse on Education” to the students of the new Westfield Academy, promoting universal education.

Grace Bedell was an 11 year old Westfield resident who wrote to Abraham Lincoln during the 1860 presidential campaign to suggest he increase his appeal by growing out his whiskers. Lincoln complied and soon thereafter won the election. The inaugural train that carried Lincoln from Illinois stopped in Westfield on its way to Washington, D.C. Greeting the thousands who thronged the train, Lincoln asked to meet his correspondent and thanked her for the sage advice. Their meeting is commemorated with a small park and sculpture at the intersection of Main and North Portage Streets in the Village of Westfield. (Another train carrying Lincoln passed through Westfield in 1865, but this time it was his funeral cortege, stopping to take on wood and water at one o’clock in the morning. Only five local women were allowed on the train to view the body. They presented a wreath of flowers and a cross, inscribed “Ours the Cross; Thine the Crown,” then kissed the coffin in tears and departed.)

George M. Pullman was born in nearby Brocton, New York in 1831. He clerked at a Westfield farm supply store from 1845 to 1848, earning $40 per week. During a late-night train ride from Buffalo to Westfield, he resolved to make such trips more comfortable and this idea eventually led to his invention of the Pullman Sleeping Car and the establishment of the Pullman Palace Car Company near Chicago. Incidentally, the car the Lincoln family used in the funeral cortege that stopped in Westfield was the new Pullman “Pioneer”, the company’s first real luxury car, built at a cost of $20,000.

Benjamin Franklin Goodrich was born in nearby Ripley, New York in 1841. He was educated at the Westfield Academy and at the age of 17 began to study under Westfield doctor John Spenser, spurring an interest in chemistry that would lead to experiments with rubber and to the company now known as B.F. Goodrich Tires.

Carson Nesbit Cosgrove may not be a familiar name, but you’ve eaten his vegetables. Cosgrove’s parents were Irish immigrants who moved to Westfield in 1850 to escape the potato famine. He was born in 1852 and attended Westfield Academy. In his late teens he moved west and finally settled in Le Sueur, Minnesota. There he became a respected member of the community, operating a hardware store and breeding stock. In 1903 he founded the Minnesota Valley Canning Company, now known as the Green Giant Company. He also served in the Minnesota State Senate from 1919 to 1923.

Charles Austin Fosdick is not widely known or read now, but in the post-Civil War era he was the best-selling author of adventure books for boys, using the pen name “Harry Castlemon”, and he wrote most of them in his home on South Portage Street. His credo was simple: “Boys don’t like fine literature. What they want is adventure, and the more of it you can get in two-hundred-fifty pages of manuscript, the better fellow you are.” He was a prolific writer, penning such popular series as the Gunboat Series, the Rocky Mountain Series, the Roughing It Series, the Rod and Gun Series, and the Sportsman’s Club Series. Fosdick and his wife, Sarah, married in 1873 and spent the rest of their days in Westfield; he followed her in death in 1915 and they are buried next to each other in the Westfield Cemetery.

Albion W. Tourgee was an attorney and writer who lived in nearby Mayville, New York. In 1896 he represented the plaintiff Homer Plessy in the landmark civil rights case Plessy v. Ferguson, which established the constitutionality of segregation by race in public accommodations, under the doctrine of “separate but equal”. Tourgee is credited with introducing the now-common metaphor of “color-blind justice” during the case. Tourgee’s daughter attended Westfield Academy and on her way to school each day passed a dilapidated roadside inn that stood about two miles outside of the Village of Westfield on Portage Street. Tourgee later used it as the setting for the novel Button’s Inn, published in 1887.

Charles E. Welch, founder of Welch’s Grape Juice Company, moved his fledgling company to Westfield in 1897, where it maintains some corporate offices and a processing facility to this day.

Marion Dickerman was born in Westfield in 1890. She was a foot soldier in the American Progressive movement during and after World War I and later through her involvement in the New York State Democratic Party became acquainted and then intimate with Eleanor Roosevelt.

H. Harrison Clarke was born in Pennsylvania in 1902 but his family moved to Westfield in time for him to attend Westfield Academy. At the time the school had no gymnasium and used the Y.M.C.A for sports events and practices. The young Clarke was a finely-tuned athlete who took an interest in the science of physical fitness. From these humble beginnings in a borrowed gym he rose to international prominence as a researcher and educator in the field of physical education as a professor at the University of Oregon. Among his many accomplishments, President Kennedy appointed him to serve on the President’s Council on Physical Fitness and in 1971 he founded the Physical Fitness Research Digest.

Harry Emerson Fosdick, the nephew of Charles Austin Fosdick, was the liberal pastor of the Park Avenue Baptist Church in New York City from 1924 to 1946. Facing the rise of the Fundamentalist Christian movement, in 1922 Fosdick authored a pamphlet titled Shall the Fundamentalists Win?, which, with the financial assistance of John D. Rockefeller, Jr., was distributed to thousands of churches around the country. Fosdick taught at Union Theological Seminary for nearly four decades and his “National Vespers Hour” radio show was heard on NBC for 19 years. This is common knowledge. What is not as widely known about Fosdick is that he was raised in the Village of Westfield, and at the age of 7 was converted and baptized in the First Baptist Church of Westfield.

Carl J. Nordell was a painter of figurative works, portraits, still lifes, and landscapes, who lived in Westfield from 1941 to 1951, in a quiet house on South Portage Street. During his time in Westfield, Nordell taught art at the nearby Chautauqua Institution.

Brad Anderson created the comic strip Marmaduke in 1955. He was born in Jamestown, New York, and graduated from nearby Brocton Central School, but he attended the Westfield Academy during the 1938-1939 school year and fondly remembers watching movies at Westfield’s Grand Theater. His father operated Anderson Implement Company in Westfield during the 1940’s.

Lou DiMuro was an American League baseball umpire from 1963 to 1982, and lived in Westfield from 1968 to 1975. He is best-remembered for a controversial call made during the 1969 World Series between the New York Mets and the Baltimore Orioles. With the Mets trailing 3-0 in Game 5, DiMuro called a low and inside pitch a strike against Mets hitter Cleon Jones. Mets manager Gil Hodges appealed the ruling and showed DiMuro a speck of shoe polish on the baseball, claiming that it proved Jones had been hit by the ball. DiMuro changed his call and gave Jones the base. The next batter Donn Clendenon launched a home run that pulled the Mets to within one run and they went on to win the game and series. DiMuro appeared on the cover of the October 2, 1969 issue of Sports Illustrated, albeit in full umpire regalia with his back to the camera.

The last figure only passed through Westfield, but he is such a historical eminence the visit bears mentioning. You will recall that the Marquis de Lafayette was the young French nobleman who volunteered his services to the struggling American forces in the Revolutionary War. General George Washington took a liking to Lafayette immediately and the Continental Congress appointed him Major-General in the American army in 1777, when Lafayette was only 20 years old. He achieved lasting popularity in this country and his name graces many towns, cities, and civil institutions, including Lafayette Park in Washington, D.C., where captured in bronze, he sits astride a rearing charger, hat doffed confidently, just across Pennsylvania Avenue from the White House. In 1824 Congress declared him and all his descendants honorary citizens of the United States. The honor was part of a triumphal farewell tour in which Lafayette visited all 24 of the then United States. That tour led him through Westfield. Thousands turned out to greet him. He would have liked to stay, no doubt, but other commitments beckoned. 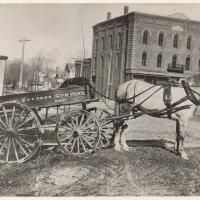