How many current (2018) Westfield Academy and Central School students know why WACS has the word “Academy” in the name for our local school? Not only that, but unless you were born before about 1950, you most likely do not remember the Union or Grade School that stood about where Westfield Family Physicians’ building and the Westfield Post Office now stand; not to mention the earlier Westfield High School and Junior High School building that was located where Top’s grocery market is now. As mentioned in a recent BeeLines about the Underground Railroad in Westfield, before the WHS, built in 1901-02, there was on that site a beautiful residence known as the Holt House, or earlier as the Knowlton Mansion.

But I digress! While researching my predecessor Westfield Historian, Billie Dibble’s “Dibbles Dabbles” for other topics, I was reminded about the old academy, and the writings of Miss Jennie Macomber about the old 1837 Academy and other descriptions from Westfield’s History. So, in today’s BeeLines please enjoy a summary of the highlights of Miss Macomber’s paper.

At that time, the Academy building was located “on the ground now occupied by the school building known as the grade school. It stood a little to the west of the site of the grand school and slightly in its rear.” (About where the Post Office is now, 2018). According to Miss Macomber the old Academy building was three stories high but much smaller than the grade school that was built in 1868. Built of brick, it had a cupola on top center which was the identical cupola on the grade school in 1927 and contained the same bell. (This bell disappeared some time after it was removed from the aging grade school building, and it is still a mystery as to what became of it.)

In the first half of the 1800s, all yards were fenced, to prevent the wandering cattle from “trespassing” so to speak. So, the old Academy had a front fence on Main Street, and one on the west side. However, Grove, Spring, Cottage streets did not exist then, and even Academy Street wasn’t known by that name until the Academy was built but was the Westfield end of the Plank Road. Even when the 1837 Academy was replaced in 1868 by the Union School which became the grade school, Cottage and Grove Streets did not yet exist, but Plank Road was then called Academy Street.

The main entrance of the Academy building was in the middle of the front, the entrance hall running through to the rear. On the left as you entered was a large schoolroom that was used as a library and a laboratory. At the rear of that room, outside, was a large woodshed that stored the wood used in the woodstoves that heated each school room.

Beyond the door into the cloak room on the right were stairs to the second floor and a landing that opened, on the left to a large schoolroom the size of the primary room on the first floor. This second-floor classroom had a platform where the lady principal, or preceptress, sat, monitoring the girl pupils at their desks. To the right of the second-floor landing was another schoolroom over the cloak room.

Beyond the right-hand classroom was another set of stairs to the third floor, and a hallway that led to a small room on one side that was sometimes used as a classroom, and then, over the girls classroom on the lower floor, was the large third-floor school room occupied by the principal at his desk on a large platform, as well as the young men students. In front of the principal’s desk were several rows of recitation benches and in the rear, and facing toward the desk, were the rows of desks occupied by the young men and boys.

The old Academy was not a free school; all students paid tuition. Primary grade tuition was $2.50 a term, while in the academy grades, tuition was $5.00 a term.

Among several interesting stories told by Miss Macomber was on about a group of five young men who came from the farms in the surrounding country to attend the Academy. They rented an empty house on Clinton Street, calling it “Starvation Hall.” Being farm boys, they were not accustomed to having to buy milk, so they developed a custom of going into the pastures on the outskirts of the village, near the Academy, to get their supply of milk from the cows that were pastured there in the night.

In the pasture were some fallen logs. Some of the young men in this group were studying bookkeeping, and one of the boys who was not milking cows to the book of another young man and made an entry – “To milking one log, debtor.” The professor called in their books for inspection and found the entry, which embarrassed the owner of the book. But he devised an explanation that was acceptable to the professor and that did not get his friends into trouble.

Note that Miss Jennie Macomber was actually a student in the old Academy building so her descriptions are from personal experience. 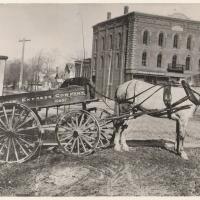 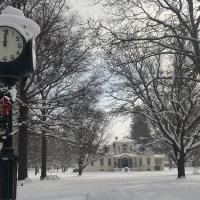